By Nick Burrows, MTP Exercise Physiologist
Pain is a long studied and misunderstood concept, however recent insights have led to greater understanding of what pain is and how it comes about. The first thing we need to realise is that pain is an output of the brain, not an input from the tissues of the body. What the tissues do is send a danger signal to the brain which it then decides what to do with. This is a difficult concept for some people to comprehend so it is best explained through the use of a few examples.

Person A is perfectly healthy with no existing issues or injuries. They inadvertently put their hand on a hot saucepan. The cells in the hand send a danger signal to the brain which then assesses the situation. The brain gets information from the eyes, seeing a saucepan over a flame, thinks back to the recent memory of you turning on the stove and thinks further back to previous experiences. It knows that fire is hot, heat can damage the skin and cause injury so it sends out a pain signal they move their hand away from the saucepan. In this scenario, pain has served its purpose as a protective mechanism.

Image 2: Whilst playing rugby for Lindenwood, Georgia Page made several tackles despite having broken her nose
The brain does not always follow this process. For example, Person B is an elite athlete playing in an important game. They suffer a traumatic injury, one that would normally leave them lying on the ground in agony. Despite this, they shake it off and continue playing, and it’s not until after the game that it begins to hurt and they realise they’ve injured themselves. What’s happened here is that in the state of excitement about the game, the brain has received the danger signal but processed everything else that is going on and decided that the injury is not a priority (and the same is true of soldiers in battle, or other people in life threatening circumstances). The priority is to finish the game (or get out of the battle) and once that is done, then the brain will send out pain signals for Person B to deal with the injury.

Image 3: For some of us even standing up from a chair can induce excruciating back pain
Our final example is the other of the spectrum. Person C has a bad back. They injured it 15 years ago and have had intermittent flare ups ever since. Every time it does flare up, they are in pain for a while, sometimes missing out on work and are unable to play their favourite sports. Due to this constant reinforcement, anytime a danger signal comes from their lower back, their brain is so wound up about the prospect of another flare up that it sends excessive amounts of pain out to stop them moving their back. However, this becomes counter-productive because not moving their back means it gets tight and weak and when they do need to use it they are at increased risk of re-injury. Further the brain’s pain signals are not helping so the brain increases its output of pain, to the point where any signal from the back is interpreted as dangerous and elicits a pain response. This wind-up in the pain process is known as chronic pain and can be extremely debilitating.
So what can we do about it?
What is required is actually the opposite of what the brain wants. Person C needs to move their back, get it stronger and retrain the brain that any movement of the back does not equal danger. However, we do need to be aware of the pain process and more importantly realise what is appropriate and inappropriate pain. This is explained in the graph below. The vertical axis represents pain, whilst the horizontal axis represents time as we exercise. The green line represents appropriate or good pain.
As we start exercise the pain will increase. This is normal even for someone who is uninjured. However, the pain should plateau at a manageable level and once we finish exercising the pain should decrease. Maybe not to baseline but it should go down. The red line is inappropriate or bad pain. This is where the pain continues to worsen and becomes unmanageable. If this is the case then we need to stop what we’re doing and either take a break or change exercise. Recognising the difference between appropriate and inappropriate pain is crucial to retraining the pain pathway and recovering from chronic pain issues. ​ 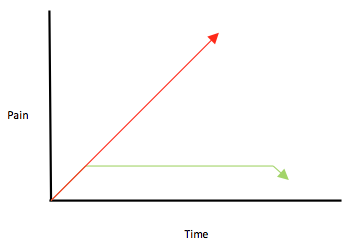