Last weekend I was lucky enough to be able to compete at the Australian/New Zealand CrossFit Games Regionals competition in Wollongong. For those of you that don’t know about it, the regionals competition is the penultimate competition for the top 60 individual men, top 60 individual women, and top 30 team CrossFit athletes from across Australia and New Zealand. From the weekend’s competition, which includes 6 grueling workouts (read: tests of fitness) over 3 days, the top 3 male and female individuals and the top 3 teams progress to the World CrossFit Games in Carson California to battle for the title of ‘fittest man/woman/team on earth’.

CrossFit has redefined, or should I say defined, what it means to be ‘fit’.  It has taken the ambiguity and subjectivity out of the debate about who or what sport has the fittest athletes on earth and created an arena for people to actually measure their fitness against their peers. It is true that there are elements to CrossFit that CrossFit athletes need to be able to do in order to be competitive (insert: butterfly kipping pull-up, muscle ups, hand stand push ups), which are not necessarily skills that athletes from all other sports will know. However, they are all elements that are prevalent in some sports (Gymnastics) and are therefore relevant components to any test of fitness. The same can be said for the Olympic lifts that are included in CrossFit competitions. Your average triathlete (although very aerobically fit) won’t necessarily know how to complete a snatch or clean and jerk.  These elements, however, are relevant in a well-rounded test of fitness. On the other hand, the Olympic lifts are the ultimate test of power and mobility, but they don’t test for aerobic capacity (endurance). Therefore the combined test of fitness developed by CrossFit is an incredibly well balanced and well-rounded analysis of fitness.

The weekend’s competition in Wollongong saw an amazing gathering of fit, healthy, strong people ready to test their ability against their peers. Every single competitor would, in every sense of the word, be considered ‘fit’ by the average person (success for the CrossFit model).

A feature of this year’s competition was the apparent strength/power emphasis; everything seemed to be heavy. So it seemed that everything would be easier if you were a bigger, stronger athlete. To a certain degree, the competition reflected this; there were an abundance of big strong men and women murdering the weight presented to them. However, the most beautiful thing to see was how the best athletes of the weekend were not only strong and powerful with great endurance, they also displayed the best movement quality.

What do I mean by this? The athletes that performed the best over the course of the weekend had the most efficient movement and were able to express their strength and power better than other athletes who may have been ‘stronger’ in the raw sense of the word.

The two best examples of this were Kara Gordon in event 2, setting the fastest time in the world for the 2km row + 50 pistol squats + 30 Hang Cleans (60kg). And Chad Mackay in the snatch ladder hitting a 265lb (120kg) snatch.
Kara Gordon not only displayed amazing efficiency and power on her hang cleans, but also showed sublime stability, range of motion and control to power through 50 pistol squats with a smile and a wave to her fans mid squat. While Chad Mackay’s snatch ladder, which included 240 double under’s (skips with 2 rope revolutions for every jump) and 2,520lbs worth of completed snatches in the 13 minutes, was an amazing display of movement efficiency and control.

While there were bigger men in the field who listed bigger PR deadlifts and squats, once the weight reached 225lbs (or 100kg) the number of athletes completing lifts plummeted. The technique displayed by the athletes varied from horrible to incredible, and the man with the best technique was the last man standing. Chad did what no other athlete chose to do: lift with the same technique and tempo from the first lift to last lift, reinforcing the good movement patterns he had practiced over and over again leading up to the competition. 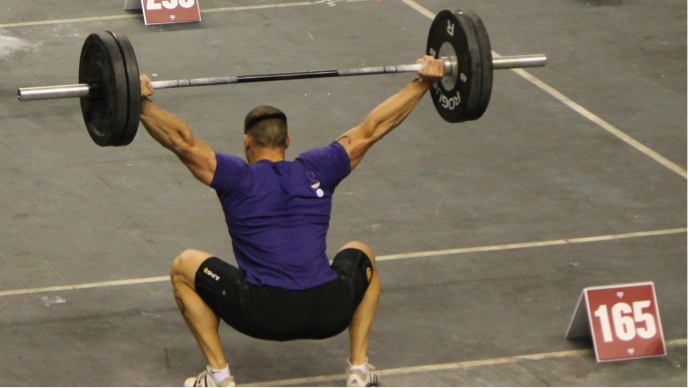 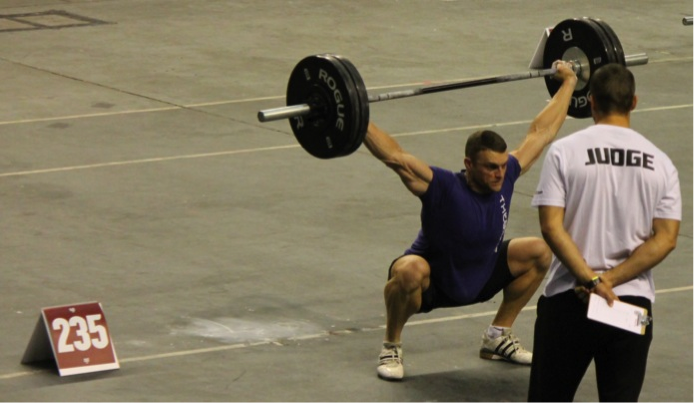 No changes at 235lbs

The only change at 265lbs is the facial expression.
Chad is a rare talent; an individual with incredible focus and determination and an ability to just keep moving no matter how much it hurts. Other athletes could learn a lot from his performance on the weekend. Chad didn’t seem to be the fastest or most explosive athlete on the field in any of the events; but he was, however, the most composed and most efficient mover on the field in almost every event. While other athletes’ lifting technique was compromised for the benefit of speed, Chad’s technique on every lift of every event was executed in almost textbook fashion. While other athletes rushed through their movements, Chad maintained a steady pace moving with the least amount of wasted energy.
Although it is something that should be (hopefully is) reinforced at every CrossFit Affiliate, the value of maintaining technique under fatigue is not always seen at the competition level. Lifting technique is taught a certain way, not simply for safety purposes but because it is the most effective and efficient way to move weight repeatedly. Chad Mackay and Kara Gordon were both fantastic examples of how maintaining movement quality at the expense of speed works out faster in the end.

Event 1: Diane, a workout that just begs you to lose your technique and go fast. Not all athletes took that bait.
Strength, Power and Speed are amazingly valuable commodities to almost any athlete, but as the CrossFit model of fitness outlines, there is no benefit in being the most powerful, strongest or fastest if you can’t express those attributes in real life situations. Congratulations CrossFit for creating such a successful test of fitness and human movement and congratulations to Chad and Kara for being the best examples of fitness and human movement Australia and New Zealand has to offer.
Categorized MTP 101